Seasonal Affective Disorder (SAD) is usually a major depressive disorder associated with feelings of low self-worth and hopelessness that coincide with winter months in northern climates. However, there are also many who experience SAD in the summer months. People who show SAD symptoms in the summer are associated with bipolar symptoms instead of depression. Summer SAD brings insomnia, anxiety, agitation and lack of appetite. In my practice of naturopathic medicine in Portland, Oregon, I also do occasionally see other situations where people experience a temporary low energy that may be described as “Spring Fatigue” that may be associated with social factors and warmer temperatures causing the body to overheat quickly among other factors.

Despite this, SAD is most often associated with feelings of depression that coincide with the reduced daylight and colder temperatures found in high latitude climates during the fall and winter months. When information about SAD first emerged decades ago, many were skeptical about SAD. However, today there is a very large body of research that shows that SAD is very real and affects millions of people worldwide. As to why so many people have the common experience of SAD, scientific research is only just beginning to unravel the complex issues involved. Some very credible explanations point out how SAD may have helped humans living in the ancient world to have tangible survival advantages. 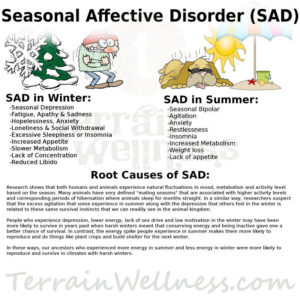 Living in colder climates where winter days are much shorter than in the summer may triggers a hibernation response in many animals as a survival mechanism. Some scientists believe that many of the symptoms of SAD match up well to mammalian responses related to hibernation. Historically, food supplies would be most scarce during cold, winter months so people and animals whose metabolisms slowed through reduced activity would likely be genetically more likely to survive. The corresponding depressed mood may well have gone along with that slowed metabolism, meaning that someone could survive on less food. In the animal kingdom, hibernation is a very common occurrence. And, even among animals that do not hibernate, there are definite behavioral changes during winter months.

Feeling depressed coincides with a decreased desire to be active, socialize while also bringing along fatigue, a lowered metabolism and a predisposition to overeat. Sounds pretty bad, right? Well, actually, as a naturopathic physician who looks at the root causes of ailments, there seems to be many logical reasons why SAD is genetically advantageous. A lowered metabolism, increased appetite and a lower desire to be active would all be positive traits if you needed to survive over a long, cold winter where you couldn’t always get reliable food. When winter food was available, those who ate in excess while experiencing lethargy and general fatigue would be much more likely to survive than someone who just sprang up like a daisy and burned off all their calories.

Another fascinating point about SAD is the gender disparity in those who suffer from it; much more women experience SAD than men. As to why this is, researchers suspect that the symptoms of SAD may be some sort of body response that helps to regulate reproduction. In prehistoric times, winter months often meant scarce food supplies and lack of warm shelter, all of which could be very challenging to a woman who was pregnant. Over countless generations, the lower chances of pregnant women surviving cold winters would have had an impact on the gene pool. As unfortunate as it may be for people in the modern world, there may have actually been a genetic incentive for women to feel depression, reduced metabolism and lower sex drive during scarce winter months. Adding further anecdotal evidence for genetic influences of whether or not a person experiences SAD is the fact that those with a family history of the condition are much more likely to experience it. As a naturopathic doctor, this understanding of how SAD became part of the human experience seems like an obvious starting point for helping people find healthy, constructive ways to work with our bodies’ biology to improve our life experience in every season.

The experience of Seasonal Affective Disorder in the summer months, with its equal and opposite reaction of symptoms of bipolar including: anxiety, insomnia, restlessness, decreased appetite, weight loss and agitation may be tied to the increase in sexual activity and desire that has been scientifically linked to warmer temperatures and longer days. Peter T. Ellison of Harvard University, describes in great detail how hot summer weather affects human behavior in his paper “Energetics, Reproductive Ecology, and Human Evolution”. Ellison ties many of the symptoms of SAD to survival characteristics without which our species may well have either failed to thrive in summer or starved to death in winter.

Ellison’s research shows how the majority of people experience an increase in metabolism, activity and sex drive in summer so it makes sense that some people would feel this difference in energy more potently than others. For some people, they feel “like themselves” in the summer months where they experience the positive side of the energy boost and are left feeling tired and apathetic in winter. For others on the other side of the spectrum, they “feel normal” in the winter and experience the burst of metabolism, sex drive and activity of summer as negative feelings of agitation and anxiety. From a naturopathic medicine perspective, both of these very human experience point toward a very similar mechanism wherein our biology is tied to the season.

Some research suggests that people with Seasonal Affective Disorder might have higher levels of melatonin compared to people not affected. This may be the reason they need more light to feel healthy. Melatonin is a hormone that causes our brain to signal the body to go to sleep when we are exposed to darkness. Other factors involve the natural human tendency of higher metabolism and increased energy of the summer months. People who experience SAD in summer feel overwhelmed by the intensity of the experience while those who feel SAD in winter are left feeling depressed when summer’s high wears off. This may be why light therapy plays a role in helping suppress melatonin during the day and can be useful in patients with SAD in winter, while managing light exposure by sleeping in a very dark room with no light from cell phone or TV screens may also help people who experience summer SAD manage their symptoms as well.

In addition to possible genetic mammalian responses to the seasons there are also a number of factors that increase one’s chances of experiencing SAD. One of the biggest impacts that the winter environment has on our bodies is Vitamin-D deficiency. While it’s true that excessive exposure to the sun is linked to skin cancer, sunburns and premature aging, it’s also true that our bodies cannot process Vitamin-D without some direct skin exposure to sunlight. Things like wearing makeup, sunscreen and protective clothing greatly reduce our sun exposure and (in low light environments) lead to low levels of Vitamin D.

For those who experience SAD in the summer time or get insomnia, one good place to start may be to get blackout curtains for one’s bedroom and don’t use any smartphone, computer or television screens at night because these interfere with the brain’s circadian rhythm.

Lack of exposure to sunlight may also affect our bodies’ ability to properly regulate sleeping patterns through Melatonin. People who work indoors in higher latitude areas may go to and from work in low light or even darkness and only be exposed to unnatural fluorescent light during their workday. Fluorescent lighting at worked combined with the blue light of television and smart-phone screens further confuse the human brain as to whether it is time to sleep or be awake.

With up to 10% of populations in northern climates such as Alaska experiencing SAD, this is certainly a very real part of the human experience. For those of us who work long hours indoors or work night or swing shift, it’s easy to see how some of the symptoms of SAD could be health factors to manage year round. Science is just beginning to plumb the depths of genetic research on how our genetics are programmed to survive long term, even if those survival mechanisms are not so well adapted to the modern world. The good news is that SAD is a very treatable condition and there are simple ways that we can all work naturally with our bodies to mitigate the negative effects of cold, dark climates.

Please use the contact form on this website to set up an appointment if it’s time for you to get one-on-one treatment for SAD from a primary care physician who is a naturopathic doctor in Portland, Oregon.