I sat down this morning to write a trite, seasonal article new beginnings and changes in life. It was to be replete with terribly tired tropes and a few recycled ideas and some catchy one-liners. Emboldened by the banality upon which I had embarked, the silkworm of writer’s block cocooned my creativity and my content subsequently sublimated into the ether. Anyway, here’s what was left after that inkling of intention had evaporated; one step in my own journey toward an increased capacity to love myself and others. Today, I focus on my own gut reactions; that hot, uncomfortable feeling where blood-pressure rises or fear flares in response to a cutting remark or offensive comment. The concept of feeling “Triggered” has become a punchline today’s world of online battles of words. The warning label on Facebook or Twitter might do well to say: Hell Hath No Fury Like Someone Triggered. When I feel emotionally “Triggered” by a situation, this is nature’s way of showing me somewhere that I need to grow as a person. This is an exercise in vulnerability, from me, to me, because this is what I need to learn in myself.

“A hurtful opinion can’t break you unless it resonates with your own unconscious beliefs.”
-Dr Danielle Smith Anderson

This simple statement neatly wrapped up months of wrestling with personal boundaries lightly seasoned with a dash of existentialism. It is strange that for physical sickness we humans seek internal cures whereas for emotional pain we seek external cures. A person with shoulder pain would not likely say “raising my arm made my shoulder hurt so I will never open a kitchen cabinet again.” Rather, that person would become curious as to why they were experiencing pain when opening a cabinet and go see a doctor to uncover what was wrong inside their shoulder. Why then, on an emotional level, do we as humans say to ourselves: “this person/situation made me sad/angry/hurt” and blame something external instead of asking “why do I feel sad/angry/hurt in these situations?” By focusing on the external circumstance of emotional pain we are ignoring the internal clue of where we need to heal.

With this in mind, the hackneyed adage “sticks & stones may break my bones but words can never hurt me” is not really true. For me, a more constructive statement is to say that “emotional pain is a clue as to where I am already broken.” As I reminisce about different times in my life when I have been insulted I can recall some situations where the experience felt like a crushing blow and other times where the verbal/emotional assault just seemed to fall flat. What follows are two examples in my own life, one in which an insult didn’t hurt me and another in which I felt wounded (both situations taught me something).

The Insult That Didn’t Hurt & What It Taught Me

I am fascinated by the way that the verbal attack had bounced harmlessly off of my own self-acceptance and how the person’s offensive statements were coming from their own pain.

Awhile back, someone publicly insulted me with a tirade of homophobic slurs (I had foolishly argued with someone who was demonizing opposing viewpoints and I responded immaturely). Anyway, while I reflected on my poor choices that had led up to the argument I noticed that I didn’t feel shamed by the other person’s attack on my sexuality. I found that the insult didn’t land because I’ve fully accepted my own heterosexuality and I have also learned how to accept/love people who are LGBTQ. By respecting myself and the humanity of the LGBTQ community, the accusation of me being gay really didn’t hurt me. In my formative years, verbal attacks like this had greatly affected me so it was very interesting to see how knowing myself and accepting others had protected me as an adult. Because the verbal attack didn’t throw me off, I was able to see how the other person was responding from their own pain and grief and how my own immaturity had contributed to the problem.

While I definitely learned a lesson about not engaging in petty arguments, I am fascinated by the way that the verbal attack had bounced harmlessly off of my own self-acceptance and how the person’s offensive statements were coming from their own pain. In retrospect, I am thankful for that experience because it highlighted how a verbal assault could be diffused in advance when one’s self-image and respect for others is healthy. Or better yet, having healthy enough boundaries to see that the other person was only acting out internal pain/grief and avoiding the conflict to begin with. As a side note, I am inspired by people in the LGBTQ community who have learned how to love themselves and others despite being subjected to such treatment on a regular basis. This self-acceptance has set them free to live their lives and I can learn from that example.

The Insult That Hurt Me & A New Way To Love Myself

“That person hadn’t insulted me so much as I had spent years insulting myself.”

In contrast, recently there was a disparaging comment that did manage to get through my boundaries of self-acceptance. There we were, my girlfriend and I, on vacation together and experiencing conflict. The point of contention between us was a series of insulting comments that a relative had made about me and my chosen career path. As a real estate broker who stayed in business through the Great Recession I was surprised that the hurtful statements had broken through my boundaries and hurt me. Nonetheless, someone’s smirk while asking how long it had taken for me to abandon real estate to become a bartender had ripped the bandage off of a deep wound of underlying hurt and shame. I felt shame that someone would automatically assume that I had failed and also felt hurt that my girlfriend hadn’t spoken up for me. Sitting across the table in idyllic summer sea-breeze, it seemed as if each one of my failed real estate deals had risen from the ashes as a twisted phoenix, reanimated as haunting specters echoing my inadequacy as a man, as a human.
life-is-either-a-daring-adventure-or-nothing.jpg

While my girlfriend and I traveled back to our hotel we each took a deep breath and then consciously reaffirmed each other and explored the pain we both felt. The negative comment had revealed that I had used hurtful self-images and negative internal dialogue as a way to shame-motivate myself into financial success (with mixed results). And, when I did have crashed deals or slow seasons I was all too quick to view those down times as evidence of low self-worth. That person hadn’t insulted me so much as I had spent years insulting myself. For her part, my girlfriend realized how she had been motivated to keep the peace at any cost and had put that ahead of her own (and my) emotional well-being. 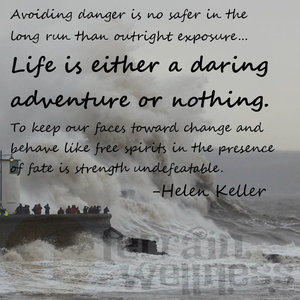 That evening we relaxed on the beach and watched surfers come in as the stars came out while finding new ways to love ourselves and each other. I’m thankful that my girlfriend and I were able to experience the pain of that interaction and learn the lessons within that pain. Ultimately, the relative’s statements had more to do with his own personal grief process in regard to his ups and downs in small business and very little to do with me as a human. As it turns out, the person who made the negative statements had been unsuccessful in real estate and was looking for an excuse for my success and to take me down a peg so that I was not a reminder of his shortcomings. I have real compassion for that person because there have been a hundred times throughout my career where I have felt that way myself. However, rather than proverbially never raising my arm again, I’m using the pain I felt as a clue guiding me to where I need to heal.

My eyes were opened to an area of my life where I was being very harsh with myself. Sometimes I succeed and other times I fail, but the only way for me to truly avoid failure is to never try in the first place. In my own self-talk, I had been that insulting, negative person toward myself and that is why that external statement affected me so much. I am forgiving myself and the other person and learning to respect myself in victory and defeat.

“Life is either a daring adventure or nothing.” -Helen Keller

One of the many things I need to learn from these experiences is that bravely facing this emotional pain is what has led me to what personal growth I’ve already experienced. My work in a supporting role for the Terrain Wellness, Naturopathic & acupuncture Clinic in Portland, Oregon has challenged me on many levels. But beware, this growth has brought new pain too though; through my own healing I am awakened to ways that I have hurt others and I am saddened to see that I am guilty of such things. And, if anyone that I have hurt is reading this, know that I am truly sorry. Looking back on times when I was the one lashing out in my own pain is a tough mirror to look into. But, realizing that the solution to that pain is to learn the lesson and accept myself and others offers a lasting way to avoid repeating those mistakes. When I spend my energy fighting the external stimuli associated with my emotional pain I am doing nothing to address the internal injuries that are a root cause. Helen Keller’s quote on bravery and avoidance rings true for me in these situations.

In closing, this is a life lesson written by me and for me, because this is what I need to teach myself on my personal journey toward maturity as a man and human. The holidays bring families together but can also be a time of great emotional distress. My wish for all humanity is that we can learn to use our emotionally painful experiences to transform ourselves into better humans. Both of these experiences were valuable teachers in my life. Instead of simply feeling angry and bitter at the people who made such comments, I have grown by examining why a statement hurt me. The pain of insults have been valuable clues along the path of learning how to more fully accept and love myself.