Most of the herbs for liver in acupuncture/Chinese-Medicine are used as foods/seasonings and are known to have a bitter taste that is stimulating to the liver and bile production. Since these plant based medicines are often eaten as food, they are generally considered safe. However, please consult a naturopathic doctor trained in Chinese medicine if you are using foods as medicine (especially daily and/or in high doses). If you have any active liver disease, gall bladder disease, or bile duct issues, these herbs for liver may cause an unsafe reaction with your health condition and medication.

Looking for a way to incorporate some of these liver herbs into your diet? Try your hand at decocting herbal teas with this easy herbal tea recipe. 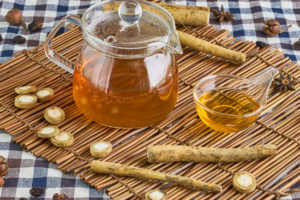 Burdock is a mild tasting herb, with slight bitterness and some sweetness that has benefits for the kidneys and liver. Burdock is often used in teas, broths, or eaten in Asian cuisine. Burdock contains many vitamins, minerals and medicinal compounds. Some nutrients include calcium, phosphorus, iron, thiamin (vitamin B1), riboflavin (vitamin B2), niacinamide (vitamin B3) and vitamin C. Burdock root also contains quercetin, a bioflavonoid that is known to control histamine release in allergic reactions.
The water-soluble fibers in burdock help the intestines get rid of toxins from the body. The inulin content is a PRE-biotic, which feeds healthy gut bacteria. In addition, it is often used for skin conditions due to its lymph-moving actions and nutritive effect. The lymph vessels help carry toxins away from cells, while the vitamins and minerals help to rebuild healthy cells. It is soothing to gut membranes and has been shown to have some anti-tumor effects.

One burdock root benefits for liver is due to its anti-oxidant and anti-inflammatory properties, it has also been shown heal liver cells from damage caused by alcohol, acetaminophen, or other liver-damaging toxins. It also promotes glutathione activity. Burdock root is also used to lower blood pressure due to its diuretic effect on the kidneys. “Diuretics” (like burdock root) are substances that cause the kidneys to remove more water from the bloodstream, which decreases the volume of the blood in the body and lowers blood pressure. As a diuretic, burdock root for kidneys may be advisable in certain conditions. However, please consult with your doctor before using natural diuretics as this may interfere with kidney medications. 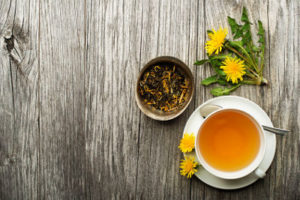 Although we often view this as a weed, dandelion is especially good for the liver. In order to mitigate the bitterness, you can use roasted dandelion root, which is reminiscent of coffee, with a sweeter and earthy flavor. The raw dandelion version will have more medicinal properties, but is often unpalatable for those not used to bitter flavors. 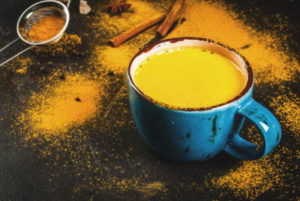 This is gives curry and golden milk their distinctive yellow color. Since turmeric is fat-soluble, it needs to be consumed with fats or oils in order to be absorbed properly. That is why it is often used with full-fat coconut milk. Another spice that is traditionally used to enhance the absorption of turmeric is black pepper. We often give turmeric in a high-dose, water-soluble supplement form to patients with acute inflammatory conditions. In its food form, we love to recommend golden milk tea at nighttime for its relaxing and protective effects for the nervous system.

Curcumin is the most well-known active constituent of turmeric, so the names are sometimes interchangeable. Turmeric has a wide-range of beneficial actions, including being anti-inflammatory, anti-oxidant, anti-bacterial, anti-fungal, anti-coagulant, and anti-tumor. It is protective for the liver and the heart. It helps to lower cholesterol, blood pressure, and helps to combat atherosclerosis.

Since it can inhibit platelet aggregation, use with caution if you have a bleeding disorder. It can also be too stimulating at high doses for pregnant women and is contraindicated if you have a bile duct obstruction. 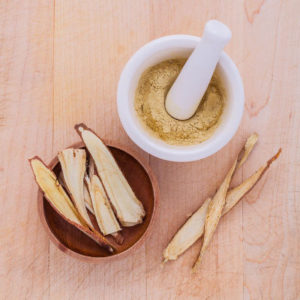 The actual licorice root does not taste like black licorice or Red Vines candy. It is a sweet-tasting herb that is very pleasant for most people. It is a friendly plant that is often added to herbal tinctures to improve the taste and harmonize the actions of the other herbs.

At Terrain Wellness, we often use the deglycyrrhinated form (DGL) to help people with acid reflux or stomach ulcers. Glycyrrhizic acid is the active constituent of licorice that raises blood pressure. This is often helpful in patients with low adrenal function and chronic fatigue. However, for people with high blood pressure, we must use the DGL form.

Licorice soothes membranes of the throat, esophagus, stomach, and intestines. It also helps with skin irritations due to its anti-inflammatory, nutritive, and detoxifying effects. It supports the liver by stimulating detoxification pathways, protects liver cells, and has anti-viral effects for viruses that are especially difficult on the liver. It is specifically used to inhibit the growth of the Epstein-Barr Virus (EBV), when a patient has high liver enzymes and low immune function. It has mild estrogenic activity, but in a way that competes with estrogen at the receptors. This means it can be used to protect against estrogen-receptor positive cancers and reduce the symptoms in polycystic ovary syndrome (PCOS).

Fun fact: licorice fights tooth decay! This is thought to be due to its anti-bacterial action against the bacteria that are most often responsible for tooth decay.
DO NOT use licorice if you have high blood pressure, kidney disease, heart failure, or liver cirrhosis. 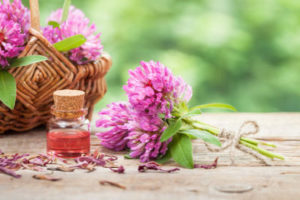 Red clover is another gentle herb that is often seen as a weed in people’s gardens. This is a wonderful herb for women in particular, but can also be beneficial for men. The beautiful flowers have a slightly sweet flavor and make a lovely tea.

It works well to reduce swollen lymph nodes (such as in EBV infections) by stimulating lymph movement, which is very important for clearing toxins out of the body. Due to this action, it is good for clearing up the skin, reducing congestion, and supporting detoxification. It can also reduce triglycerides, which decreases the burden of the liver to process these fats.

Red clover also has many actions on sex hormones due to its isoflavones. It can significantly reduce hot flashes and increase lubrication for vaginal tissue. Two important and well-researched isoflavones in red clover are genistein and daidzein, which have demonstrated anti-tumor effects. These are also found in soy, but red clover does not have the same controversy as soy products. Genistein and daidzein inhibit the growth of estrogen-positive, ER-negative breast cancer. It can also be beneficial in prostate cancer.

Caution: Red clover thins the blood. If you are on blood thinners or have a bleeding disorder, please do not take red clover without consulting your doctor. 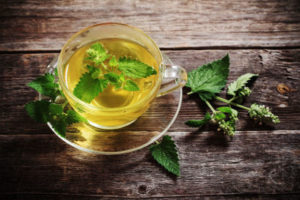 This prolific mint-family herb brings a smile to my face every time I see it. Like other mints, it grows out of control if given the space to do so. You’ll know you have lemon balm around if you see a mint-like plant that smells lemony when you crush the leaves. This vibrant plant has many benefits that it is happy to share.

We often give lemon balm tincture to patients to take before bedtime. The calming effects of lemon balm on the nervous system makes it a perfect way to ease anxiety, irritability, or any nervous system issues that contribute to insomnia. It is not a sedative though, so it is safe to use during the day as well.

This unassuming herb actually is a very potent anti-viral. The essential oils are especially good for herpes family viruses (EBV, herpes simplex, varicella, etc), but can also be effective against cold viruses and beyond. Unfortunately, lemon balm essential oil is often quite expensive. However, there is good research to support its use topically to treat herpes simplex.

Lemon balm has been used to treat patients who present with a hyperthyroid picture, including symptoms such as anxiety, restlessness, palpitations, headaches, irritability, and inability to gain weight. In high doses, it prevents TSH binding, the conversion of T4 to T3, and the incorporation of iodine into thyroid hormones. However, it can also block the binding of auto-antibodies. It is not strictly contraindicated in hypothyroid patients, but it is best to consult with a doctor on proper usage if you are dealing with that condition. It has been helpful for depression, digestive issues, and high blood pressure as well.

Sign up for our newsletter to get updates, notifications and additional resources about the 90-day thyroid cleanse.

Eliminating unhealthy foods while incorporating nutrient-dense foods and herbs can induce drastic improvements in one’s health over time. So, while a short-term “cleanse” is not a cure-all, we see this cleanse as a way to become more aware of the foods we eat and interrupt our normal routine. Through becoming more aware of our food choices, we help ourselves to make conscious decisions about the foods we allow into our lives. The hope here is that mindset of being thoughtful/careful about our food choices will continue forward and create small but significant long-term shifts in our daily health habits.

As always, consult your doctor before making diet/lifestyle changes and if you need a licensed primary care physician to help you with improving your health naturally in the Portland Metro area, we would be honored to serve you. Either way, thank you for watching and we hope this information helps you.