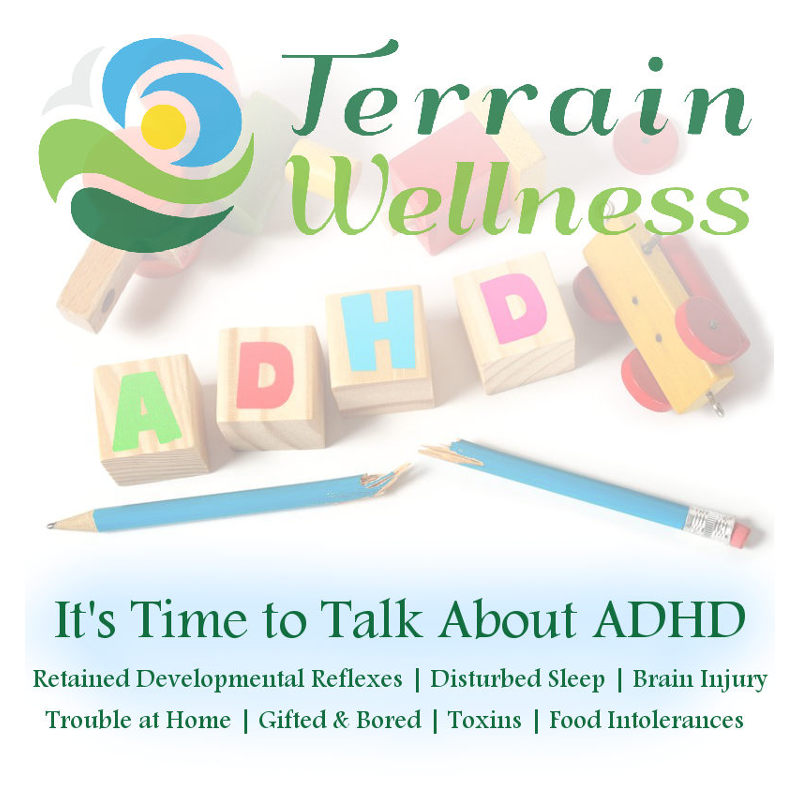 Attention Deficit Hyperactivity Disorder (ADHD) is a medical condition where a person has trouble with everyday tasks like sitting still, paying attention and impulse-control. ADHD is very common in the US and has been on the rise since the 1990s, with millions of cases currently diagnosed each year. There is no specific “cure” for ADHD and the common treatment used by pediatricians is to alleviate symptoms using amphetamine drugs like “Adderall”. That said, pediatricians and medical researchers have identified many fixable situations that may give rise to ADHD symptoms. Because Adderall only offers temporary relief for ADHD and comes with serious side effects, the doctors at Terrain Wellness in Portland, Oregon believe it is worthwhile to look for possible underlying causes of ADHD symptoms with a goal of reaching a more permanent, medication-free solution.

The Science of ADHD

Scientific studies have demonstrated a genetic predisposition to developing ADHD. However, there are no brain scans or blood tests to confirm that one has the disorder. ADHD is the extreme end of behavior seen throughout the entire population in varying degrees. Despite a lack of definitive lab scans/lab-tests to confirm ADHD, there are some general features seen in ADHD brains: the right prefrontal cortex, caudate nucleus and globus pallidus are typically smaller. These qualitative brain differences suggest lack of connectivity in key brain regions that modulate attention, stimulus processing, and impulsivity. (Medscape, 2014). ADHD also carries a notable dysfunction in norepinephrine and dopamine pathways. Dopamine is involved in reward, risk taking and mood; whereas norepinephrine governs attention, arousal and mood.

In children with ADHD, doctors and pediatrics researchers suspect that there is a dysfunction in the receptor proteins responsible for the effective utilization of the neurotransmitters, dopamine and norepinephrine. Environmental factors including family trauma, maternal health and low socioeconomic status have also been correlated to ADHD and are considered secondary causes.

How do Pediatricians Diagnose ADHD?

The national Institute of Mental health describes Attention deficit and hyperactivity disorder (ADHD) as one of the most common childhood disorders. They go on to state that ADHD can continue through adolescence and adulthood. Symptoms include difficulty staying focused and paying attention, difficulty controlling behavior and hyperactivity (NIMH 2014). Doctors, pediatricians and psychiatrists have categorized ADHD into three subtypes:

As illustrated above, there are numerous possible causes that result in symptoms like ADHD. As such, while there are cases of neurotransmitter imbalance in children with ADHD, it is important to look for any contributing or underlying causes before using stimulant or anti-depressant medications. As naturopathic physicians, we have the privilege to explore and investigate the underlying causes and contributing factors to a disease manifestation. As a licensed primary care physician in Portland, Oregon practicing naturopathic medicine and acupuncture, I take the time to get a thorough history of diet, toxic exposure risk, developmental reflex integration and incidences of injury to help create effective treatments for children with ADHD symptoms without exposing children to the side-effects of psychotropic medications. It is my goal to move treatments for ADHD toward natural solutions to ADHD symptoms whenever possible.