Osteoarthritis affects millions of Americans every year, with symptoms appearing in the knees of 10% of men and 13% of women over age 60, according to researchers. Making matters worse is that the standard of care treatments for this common ailment center around quick-fixes that actually cause serious joint damage over time. When a patient complains of knee pain, the normal medical advice usually involves using NSAIDs like Ibuprofen/Advil to ease pain and inflammation and then graduating to Cortisone shots when those treatments’ side effects take hold. Yet, despite the prevalence of these painful and debilitating joint conditions, there has been relatively little development in terms of better treatments until recently. So, is there a better way to treat joint injuries and cartilage deterioration? Yes, there is: Prolotherapy.

Prolotherapy is a revolutionary treatment modality that stimulates the body to regrow its own natural cartilage, ligaments and other connective tissues. “Prolo” is short for proliferative, because this technique is designed to have the body’s living cells within the joint to proliferate. Rather than a hugely invasive surgery, small injections are made to specific points of damage to the knee joint, with each injection site becoming a site for cartilage and/or ligament regrowth. With stop-gap measures like ibuprofen and cortisone for pain and inflammation beginning to fall out of favor (for good reason), there has been an increase in demand for better, more lasting solutions that can actually stimulate real joint repair. This isn’t just some distant future, prolotherapy has already become that better solution for thousands of patients already (prolotherapy research).

How does Prolotherapy regrow joint cartilage? 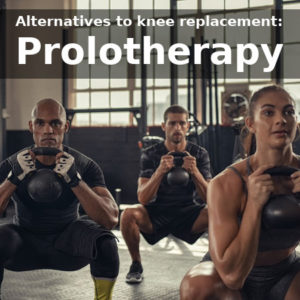 To answer how prolotherapy works, we first need to examine why joints take so long to heal in the first place. Joints, cartilage, tendons and ligaments take a long time to heal primarily because they are “avascular”. Being avascular is a medical term meaning that there are no blood vessels in these body structures. No blood vessels means that joints don’t have an easy in/out flow to take in nutrients and eliminate waste. As a result of being avascular, joints have to get by on limited resources so repairs are slow.

But, where does joints being avascular intersect with how prolotherapy works? Prolo works by triggering the body’s own injury response by mimicking the chemical conditions that are present during a bruise, all without doing actual damage to the joint. Since joints don’t have blood vessels in them, joint injuries don’t trigger as much of a healing response as compared to bruises on muscles. When muscles are injured, cells, blood vessels and other important structures rupture/break, spilling their contents out into the surrounding body tissue. One of the substances that spills out of broken body cells during these bruising injuries is sugar, there are also proteins and blood components like platelets and other substances released. But, since joints don’t have blood vessels, they don’t bruise in the same way as muscles do.

Basically, prolotherapy simulates an injury that triggers the body’s healing response even though no real injury has occurred. By repeatedly triggering the body into healing from simulated injury, the joints regrow and become stronger. This isn’t just theory, the medical research clearly backs up the fact that knee cartilage repair without surgery takes place with prolo:

This medical research confirms what doctors in clinical practice have already clearly seen: patients getting prolo had reduced pain, increased joint range of motion and had improved function scores meaning they had improved quality of life and mobility.

The side effects of prolo are described as “benign” and common to joint injection, regardless of what is used. This means that the side effects of prolotherapy would also happen with other modalities like cortisone shots. But, unlike cortisone which actually causes joint damage over time, prolo has been shown to cause long-term improvement. Yes, patients may experience some temporary stiffness, which may also accompany some bruising and temporary pain at the injection site. Nonetheless, when we weigh the temporary discomfort of getting knee injections against the ongoing pain of osteoarthritis or a joint injury that just won’t heal, the results clearly tip the scales in favor of prolo. It should also be noted that these side effects usually resolve quickly, while the benefits are lasting. Adverse reactions and/or complications can be minimized through having a skilled practitioner perform the injection procedure. For what it’s worth, our physicians are also licensed acupuncturists, which does give them quite a bit of skill in painlessly using needles in their practice.

Because the side effects are generally mild and short-lived while the benefits are proven and long-lasting, we do recommend proliferative joint regrowth techniques for patients with certain joint conditions like osteoarthritis and specific injuries that are treatable. At some point, surgery such as total knee replacement may become necessary. Again, we caution patients to consider the serious side effects of cortisone and Advil/Ibuprofen before using them to alleviate joint pain. In contrast, because injection of dextrose has been shown to be effective and is much less invasive, it makes total sense to try this effective, non-surgical option first.